Petrified wood is a fossil, which forms when a dead tree is rapidly buried by sediment which protects it from decay due to oxygen, insects and other organisms. After which, groundwater rich in dissolved elements flows through the sediment and replaces the original plant material, atom for atom, by elements such as silica, calcium and sulphur. The result is a replica of the original trunk which normally consists of opal or chalcedony. A fossilised tree is often harder and more resistant to weathering than its surrounding material, and as the sediment is washed away the fossilized trees are exposed and accumulate.

The largest known petrified forest in Southern Africa was discovered 34 km south-west of Fransfontein, in Namibia, in the early 1950’s. One area contains more than 10 square hectares of fossilized logs of the specie Dadoxylon Arberi Seward.

Other South African localities of petrified wood can be found near van Wyksvlei, Murrayburg, Philipstown and the Umkomaas Valley in Kwazulu-Natal. A popular tourist destination is the Mzamba Fossil and Petrified Forest Trail near Port Edward.

The most recent discovery is a petrified forest on the sea floor, 30km east of Kleinsee in Namaqualand. A collection of fossilized yellow wood trunks occurs over two square kilometers, 130-140 meter below sea level. It was discovered by side scan sonar during exploration for marine diamonds off the Atlantic Coast.

Colourful petrified wood
Petrified wood with spectacular colours and full petrification is highly prized and can be polished and made into jewellery.

Is it legal to collect petrified wood?
In SA, fossilized wood is considered a fossil and thus, by law, considered a national treasure and you are not allowed to excavate it without a permit. Fossilized wood from other countries such as Namibia, or if it has been collected prior to the law protecting natural resources, should not be illegal. 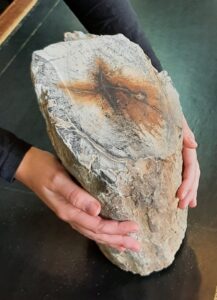 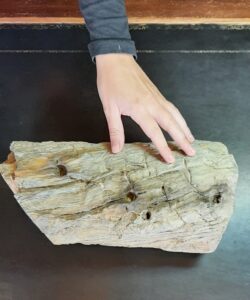 A magnificent specimen of petrified wood now on display at The Museum of Gems & Jewellery which houses a fascinating collection of Earthly Treasures.